IS ISLAM COMPATIBLE WITH GENDER EQUALITY? – DEBATING AT OXFORD UNION A few weeks ago (23rd of May 2014), I was debating at the Oxford Union along with i.a. Myriam Francois Cerrah & Adam Deen opposing the motion “This house believes Islam is incompatible with gender equality.” We won the debate with great results: 166 opposition : 51 proposition!

I was waiting for the audio recording to be released, but that doesn’t seem to happen anytime soon. So, here we go, this is the transcript of my speech:

Here I am, claiming that Islam is compatible with gender equality. And it might seem a little absurd saying that – looking at our world today.

After all, isn’t Islam seen as the religion of sexual oppression? Not only tolerating but fuelling violence towards women? The religion of forced marriages, death stoning, female genital mutilation, polygamy, depriving young girls of their right for education – a women hating ideology? – As the proposition might indicate in the following hour.

I am not arguing today that misogyny in Muslim communities does not exist. Because it does exist. However, many women today here in this room and around the world have not only witnessed these awful practices, but have also fought against them – based, encouraged and empowered by their religion, their faith, Islam.

Today I will start by providing you with three common examples which are misused to argue that Islam is to blame for misogyny:

At least half of the forced marriages that have been reported to UK’s forced marriage unit in 2012 involved communities that are predominantly Muslim. And unfortunately, in many cases, Islam is being misused to justify this awful custom.

However, forced marriage is a cultural practice. And it violates your right as a woman and – surprise surprise! – as a Muslim. The vast majority of theologians, scholars, Sheikhs and Imams condemn this practise and agree: Islam does not allow anyone – male or female – to be married without his or her own consent. According to a Hadith, narratives detailing the life and practise of the Prophet (Peace Be Upon Him), when a girl who was married off against her will, came crying to our Prophet (PBUH) saying she hadn’t agreed to the marriage, he promptly declared the marriage invalid.

And scholars, Sheikhs and Imams have also condemned many times female genital mutilation.

Let’s have a look at the case of Khalid Adem, an Ethiopian American, who was convicted for female genital mutilation (FGM) in the United States in 2006. He is charged for personally removing his 2-year-old daughter’s clitoris with a pair of scissors. At court his wife explained his motivation: “He said it was the will of God.” FGM however, does not come from the scripture of Islam, but in fact from an age old tradition in many regions in Africa, based on the assumption that women’s enjoyment of sexual intercourse might turn them “immoral.”

And up until a few decades ago nearly 4 out of 5 women in Ethiopia were victims of FGM. In a country whose population is 63 percent Christian. Can we now blame Christianity for FGM – when Christians in Ethiopia argued it was the will of God? No. This inexcusable custom that is unfortunately practised today in many other regions in Africa predates, Islam, Christianity and even recorded history.

In April this year the militant Nigerian group “Boko Haram” caused outrage around the world when they kidnapped around 276 female students from their school – again, inexcusable. I will leave their use of violence and terror aside and focus on their justification for stealing these children:

They claim that education for girls goes against Islam. This, however, has no basis whatsoever in Islamic scripture. On the contrary, the Prophet Muhammad (PBUH) wisely emphasised that every Muslim man and woman has a duty to seek education. In fact, the very first command that was revealed was “Iqra!”, “Read!” symbolising the duty of every Muslim: to pursue and seek knowledge. And there is no difference being made between men and women.

As a matter of fact, women of the Prophets community had the right to comment forthrightly on any topic, even the Quran. And both God and the Prophet (PBUH) assumed their right to speak out and readily respond to their comments. They, too, have participated actively in the creation of religious knowledge in the early days of Islam.

Muslim women have been scholars, Muftiyahs and Qari’ahs for centuries. Some of the greatest male scholars, like Hasan alBasri, Ibn Hajar and Ibn Taymiyyah, all had female scholars as teachers and contemporaries – like Rabia al-Adawiyya, one of Islam’s first mystics.*

And I could give you hundreds of other examples, starting from the first person to convert to Islam, Prophet Muhammad’s (PBUH) wife Khadijah. A woman who was married three times and had children from all her marriages. A successful business woman, 15 years older than her husband Prophet Muhammad (PBUH). Imagine the reactions today, a young man marrying his 15 years older boss and single mother.

I am not denying that Islam can be (and is) read in patriarchal modes and be misused to justify privileges to men and inhumane practises against women. But I firstly point out that those readings are being challenged by respected religious scholars and are disputable. Secondly I argue that Islam can and is being read in anti-patriarchal modes and hence is indeed compatible with gender equality.

And thirdly I argue that the readings I am referring to are not a tool to belittle and sugar-coat Islam and please a Western audience – it is an appeal to certain Muslim communities to look at the texts, keeping in mind that the readings are not the words of God, but the holy Quran is. The readings, tafsir of the Quran are interpretations of humans, influenced by society, history and politics. Who has dominated the readings of the Quran in the past decades? Men. Men who have lived and were socialised in patriarchal societies. Naturally, their readings have been influenced by those factors, too.

Nevertheless, male and female scholars have been challenging in the past and continue to do so in the present, patriarchal readings of Islam.

Yes, as I have said earlier, misogyny does exist in Muslim communities. And it also does exist in communities of other faith and no faith. These practises are not unique to Islam, they are not rooted in the Islamic scripture.

By eliminating religion, you cannot eliminate misogyny.
By clinging on to a “misogynistic Islam”, you will not bring any change to society.

If the motion today were: Many Muslims are not acting in compatibility with gender equality, yes, I would wholeheartedly agree.

But the motion today is: Islam is not compatible with gender equality. That is, to put it simply, wrong.

By voting against the motion today, you say that, yes, Islam is compatible with gender equality. And you will turn on the volume for thousands of men and women around the world, who have been and are fighting against misogyny. on. a. daily. basis.

*Great read: Women in history who rock – by woodturtle

by kübra gümüşay
3 Comments
prev next 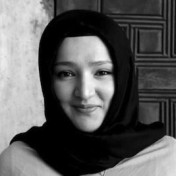